Cepedex 0.5 mg/ml is a clear, colorless solution for injection for dogs and cats containing the active substance dexmedetomidine hydrochloride. This veterinary medicinal product is indicated for immobilisation, sedation and analgesia in various procedures in dogs and cats. Cepedex 0.5 mg/ml belongs to the veterinary medicinal products that may only be administered by veterinarians (UDD).

Cepedex 0.5 mg/ml has the registration number: 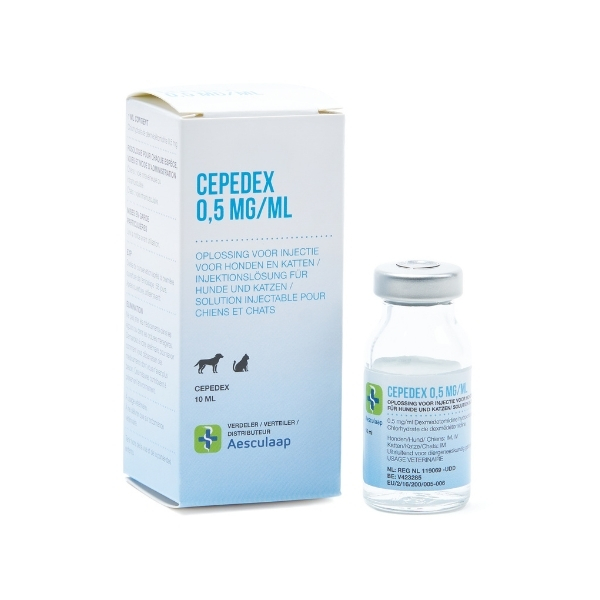 The veterinary medicinal product is intended for:

The dose of dexmedetomidine is based on body surface area and depends on the degree of sedation desired.

In the leaflet you will find the different dosing schedules for dogs and cats.

Due to its α2 -adrenergic function, dexmedetomidine causes a decrease in heart rate and body temperature. A slowing of the respiratory rate may be observed in some dogs and cats. Some rare cases of pulmonary edema have been reported. Blood pressure will initially rise and then return to normal or below normal. Due to peripheral vasoconstriction and venous desaturation, pale and/or bluish discoloration of the mucous membranes may be observed with normal arterial oxygenation. Vomiting may occur 5-10 minutes after injection. Some dogs and cats may also vomit upon awakening from the anesthesia. Muscle tremors may occur during sedation. Corneal clouding may occur during sedation (see also section on Special precautions for use in animals). If dexmedetomidine and ketamine are taken 10 minutes apart, cats can sometimes experience AV block or extrasystole. Respiratory problems to be expected include bradypnea, an intermittent breathing pattern, hypoventilation and apnea. In clinical studies, hypoxemia was common, particularly during the first 15 minutes of dexmedetomidine/ketamine anaesthesia. After such use, vomiting, hypothermia and nervousness have been reported. When dexmedetomidine and butorphanol are used concomitantly in dogs, the following adverse reactions may occur: bradypnea, tachypnea, irregular breathing pattern (20-30 sec apnea followed by several rapid breaths), hypoxemia, twitching or tremor or cycling, excitation, hypersalivation, retching vomiting, urination, skin erythema, sudden excitement or prolonged sedation. Arrhythmias with brady- or tachycardia have also been reported. May include sinus bradycardia, 1st and 2nd degree AV block, sinus arrest or pause, and atrial, supraventricular and ventricular premature complexes. When using dexmedetomidine for premedication in dogs, bradypnea, tachypnea and vomiting may occur. Arrhythmias with bradycardia and tachycardia have also been reported, including marked sinus bradycardia, 1st and 2nd degree AV block and sinus arrest. Supraventricular and ventricular premature complexes, sinus pause and a 3rd degree AV block may be observed in rare cases. When dexmedetomidine is used as a premedication in cats, vomiting, retching, pale mucous membranes and low body temperature may occur. An intramuscular dose of 40 mcg/kg (followed by ketamine or propofol) often resulted in sinus bradycardia and sinus arrhythmia, was sometimes followed by 1st degree atrioventricular block and was rarely followed by supraventricular premature depolarizations, atrial bigeminus, sinus pauses, 2nd degree degree atrioventricular block, or “escape” beats/rhythms.